Croatia is one of the most popular summer holiday destinations in Europe.

It is best known for its dramatic coastline, dark-blue waters of the Adriatic Sea, beautiful islands and picture-perfect medieval towns. But it is also the interior with its diverse landscape, stunning National Parks and lively cities that deserve our attention.

If you are a city-break person, don’t miss Zagreb, Dubrovnik or Split with their historic centres, cultural scenes and gastronomy. If you enjoy the Great Outdoors, head to Plitvice Lakes or other National Parks and mountains. If you are a beach bum, there are plenty of islands or coastal towns from which to choose.

Croatia is one of the most photogenic countries in Europe and it has so much more to offer than just a beach holiday.

Croatia Road Trip: Best of the Adriatic in 7 Days

What would your dream holiday in Europe look like? What about picturesque historic towns, dramatic coast, crystal-clear waters, pretty islands, various national parks and amazing views around every corner? If it sounds good, a road trip to Croatia could be your next perfect holiday… 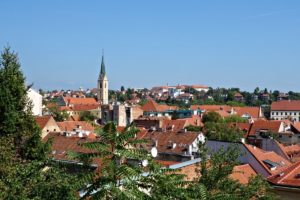 One Day Only – Zagreb, Croatia

Let’s be honest – Zagreb, the capital of Croatia, wasn’t on our bucket list and we didn’t know much about the city before. But now, after we had been there, we know that Zagreb is definitely worth a trip. This is our take on how to spend a perfect day in Zagreb…